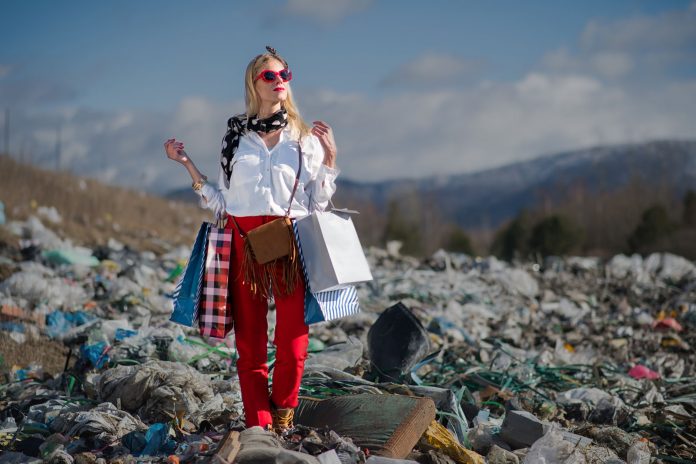 With online shopping making it so easy to buy anything you want at the click of a button, it’s a good time to talk about one of the dark sides of this—the negative impacts of fast fashion.

For a few decades, we’ve enjoyed the perks of fast fashion: ever-expanding wardrobe options, cheap price tags, and fun trends to experiment with. Unfortunately, it’s not all fun and games in the world of fast fashion, and there are negative fast fashion environmental impacts that we should be aware of.

What is Fast Fashion?

The origins of fast fashion can be traced back to the 1990s—more specifically, when the clothing giant Zara opened their doors in New York. The New York Times described Zara’s ultra-quick production model as “fast fashion.”

Soon after, other retailers like TopShop, Forever 21, and H&M followed suit by minimizing the time between design to retail to just two weeks.

When we think of fashion, many of us think of four or even just two seasons. Practicality would mean having just “warm weather” and “cool weather” clothes, right?

Well, in the fast fashion world where making sales is paramount, retailers have been known to push upwards of 52 style seasons every year. This means that “staying trendy” requires a whole new wardrobe every seven days.

This may be great for retailers and fashion brands, but it’s a huge fashion faux pas for our planet.

As fast fashion started to gain momentum, it began to encompass a few other things: super cheap prices and a devaluation of clothes.

In the decades prior to $5 t-shirts and BOGO sales on cheaply-made shoes, humans had a much greater appreciation for garments. Collectively, we had the skills required to mend a rip, check a seam, and replace a button. We prioritized durability and high-quality materials.

With fast fashion, this all went out the window. Cheap, plastic-based fabrics became the stars of our wardrobes. Small tears or pilling not only became expected, but started to be regarded in a different light.

Why would you spend time worrying about an unraveling seam (much less try to fix it!) when you could just replace that pair of jeans with a new, trendier version—and at a price that doesn’t break the bank?

There has been a clear winner with consumers choosing quantity over quality. Overflowing shopping bags and homes with several closets have started to become the norm. The fast fashion industry convinced us that we needed more, and that to keep up with trends, we had to take advantage of cheap prices and free 2-day shipping.

Too much of a “good” thing can be bad, and too much of a thing with hidden costs can be really bad.

According to a study by McKinsey, since 2000, we have doubled the number of garments we’re producing. This is combined by the fact that we’re only keeping clothing for about half as long as we did at the turn of the century—and in some cases, are discarding garments after just seven or eight wears!

It’s clear that this is a recipe for disaster—and this is when we’re talking about the clothes that we actually wear! It’s also been found that more than 60% of the garments produced every year end up going directly to landfills or being burned in incinerators.

Some of us might remember some alarming news out of 2016—when H&M was caught red-handed burning 19 tons of new apparel! They aren’t alone, and this isn’t uncommon. Unsold merchandise (aptly called “deadstock”) commonly ends up being destroyed. And when clothing makes its way to the consumer, it doesn’t fare much better.

According to the Council for Textile Recycling, only 15% of clothing we wear gets donated or recycled. This means that the average American throws away a whopping 70 pounds of clothing every single year—which amounts to 5% of total landfill space and an unbelievable 34.5 billion pounds of waste.

That amount is hard to grapple with, but if you have trouble picturing what 70 pounds of clothing looks like, just imagine throwing away 191 T-shirts every year… It’s clear that our mothers’ advice to “waste not, want not” has been replaced by “waste everything, want more.”

Not only are our textile waste habits taking up more and more space in growing landfills around the globe, but they’re also responsible for a significant amount of carbon emissions.

In fact, textiles account for 10% of the world’s total carbon emissions. According to The Guardian, the fashion industry is also the second-largest industrial polluter, just behind oil.

Speaking of oil, most of what we wear has been made from fossil fuels. In 2015, just the production of polyester clothing produced 706 billion kg of greenhouse gas emissions—equivalent to what’s produced by 185 coal-fired power plants over the span of a year!

3. Water Use and Pollution

Fast fashion is also one of the thirstiest industries. According to the United Nations Environment Program (UNEP), just one pair of jeans requires 3,781 liters of water.

Cotton is the biggest culprit when it comes to quenching fast fashion’s thirst. Just one cotton t-shirt requires 2,700 liters of water—which happens to be the amount an average person drinks in two-and-a-half years (World Resources Institute).

Not only are the water requirements of the fashion industry meaning that seas around the globe are literally drying up, but even when water is still abundant, it’s becoming increasingly polluted.

Between dyeing and treating fabric, the fast fashion industry is responsible for around 20% of total global wastewater (World Bank). In China alone (where about 50% of the world’s clothes are produced), more than 2.5 billion tons of wastewater is produced every year.

Wastewater is problematic when you consider that about 8,000 different synthetic chemicals are used in the processing and dyeing of textiles. This means that millions of gallons of contaminated water are ending up in waterways—which results in one of many public health hazards.

When fashion industry water ends up in local waterways, it spreads far and wide—and with serious impacts. The Chinese EPA has actually declared that 70% of rivers are contaminated—with most of them considered to be too dangerous for human contact.

China’s not alone in dealing with polluted waters and the health concerns that follow. In several Indian villages, pollution from the textile industry has been associated with an increase in rates of cancer, disabilities, and tuberculosis.

Actually wearing the products of fast fashion also presents some public health hazards of its own. It should come as no surprise that the same toxic chemicals that pollute waters, contaminate soil, and harm ecosystems are also not great when they come into contact with our skin.

Studies have found that flame retardants and chemicals like formaldehyde present dangerous risks for today’s fashionistas—from endocrine disruption to cancer, we might be dressing our way to serious health complications.

Although not as conventionally “toxic” as chemicals, microplastics are presenting a similar risk. Every year, half a million tons of plastic microfibers from clothing end up in the world’s ocean.

While not an environmental impact, the exploitative labor practices used in fast fashion are also worth mentioning. Child labor, forced labor, insane work hours, abysmal pay, and exposure to toxic chemicals are what make that $8 dress possible.

And let us not forget about the tragic Rana Plaza disaster in 2013—which killed more than 1,132 textile workers. Most of them were girls and some of them had complained about cracks in the walls in the days before the collapse.

When we look at clothing, we may just see the price tag. But it’s important to realize what that amount may be missing—all of the environmental and human costs that made the garment possible.

The Slow Fashion Revolution is Here

Aware of fast fashion negative environmental impacts, more and more brands are putting on the brakes, slowing down their production practices, and using recycled or renewable materials. Where are you doing your shopping these days? If you know of any ethical or sustainable fashion brands, we’d love to hear about them!

10 Sustainability Majors for a Green Degree

Why Bamboo is Eco-Friendly (for the Most Part)