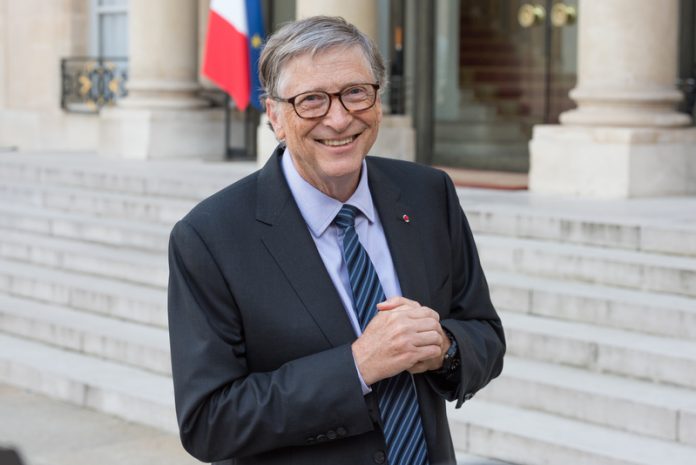 The Microsoft tech magnate may be up to more than just computer programming and philanthropy—so exactly what is Bill Gates doing for climate change?

Bill Gates is probably most well known for his philanthropic endeavors, like the Bill & Melinda Gates Foundation that he co-chairs with his wife. While his focus has generally revolved around development, global health, and education, he is also involved in several private sector ventures that are seeking to address climate change through innovation.

“How to Avoid a Climate Disaster”

It is an important time to discuss what Bill Gates is doing for climate change because he recently released a book, How to Avoid a Climate Disaster.

In the book, he not only lays out a framework that he believes can help prevent the looming climate catastrophe, but he also argues that we’ll require several breakthrough technologies to make it happen.

In a recent interview with the Washington Post, he reflects back on his college interest in all sorts of sciences, including climate change. Then again in 2006, as he was stepping back from Microsoft to focus on his philanthropic work, he was encouraged by some of his Microsoft team to learn more about our climate.

Fascinated by the computer modeling and weather knowledge that came with learning about climate change, he began studying it in greater depth. Then working in Africa, he was faced with the realization that the provision of electricity is necessary for development—but if it comes by way of coal power it will be horrific for subsistence farmers and will cause millions of deaths.

With this awareness and excitement under his belt, he expected to publish the book in March of 2020. However, the coronavirus pandemic stopped him in his tracks and redirected his focus—and one that’s been met with varied reactions.

Along with Dr. Fauci, Bill Gates has been the central figure of many conspiracy theories regarding the vaccine, among other things. And he also expects to receive some of the same feedback based on another one of his arguments, that “COVID-19 is awful. Climate change could be worse.”

In his blog post, he shared that while the pandemic led to an emissions reduction around 8%, it’s unlikely that these downward trends will continue—although they absolutely need to do so.

If we measure the coronavirus pandemic’s impact in terms of lives lost, we can expect that by 2060, climate change will be just as problematic as COVID-19. By the end of the century, Gates anticipates that it will be five times as deadly—with economic impacts that are just as alarming.

With an obvious goal to save lives and reduce our risk of experiencing the worst climate outcomes, Bill Gates has used the current coronavirus pandemic to inform his ideas about what we can do to prevent it.

Gates argues that cutting back is definitely a good thing, especially for those who can afford to do so. If more of us are able to fly and drive less, change the way we eat, and make different buying decisions, we absolutely should. However, he is also aware that we cannot get to zero emissions through personal changes alone.

Instead, he said that we need new technology and innovative approaches to make significant change. This might look like new tools, different zero-carbon ways to produce electricity, and technological developments for how we grow food, make products, and heat and cool our buildings.

This will require us to bring together several disciplines—chemistry, political science, biology, economics, physics, engineering, and more—in order to develop a comprehensive response that can tackle all of the aspects of a changing climate.

2. Make sure solutions work for poor countries, too.

Bill Gates is one of many of us who have become increasingly aware that the people who contribute least to climate change are the ones who will be impacted the most. We don’t know exactly what the effects of our changing climate will look like, but we do know that the poorest people in the world will be hurt the most.

This starts with the fact that those closest to the equator will have to deal with hotter and more unpredictable weather, harsh growing conditions, and serious (sometimes fatal) health impacts that come with a warming world.

But we need to also recognize that these countries and communities will need to continue developing. That said, we need to prioritize the provision of clean sources of energy that are affordable for low and middle-income countries. This will require governments, entrepreneurs, and investors to come together to make technology that is greener and cheaper.

This is probably the most important of Bill Gates’ recommendations, because the urgency for facing climate change has never been stronger. He suggests that we create a plan, use tools we currently have, and make great strides towards developing and deploying the innovations that are needed.

He is personally investing in new clean energy technology and building programs to help these innovations be adopted around the globe. He wants governments and other private investors to join him and use the same sense of urgency that’s been seen for COVID-19, but apply it to our climate crisis.

Here’s What Bill Gates is Doing for Climate Change

So now that we know his thoughts about climate change, let’s get to exactly what Bill Gates is doing to stop our growing environmental problems.

He owns a nuclear power plant

Bill Gates is the founder and chairman of TerraPower, a nuclear innovation company that’s “striving to improve the world through nuclear energy in science.” The company is dedicated to not only mitigating climate change, but also meeting growing needs for electricity and lifting billions of people out of poverty.

In 2020, TerraPower received funding from the U.S. Department of Energy to build two nuclear reactors, after a former agreement to build a reactor in China fell through. Now, it’s anticipated that the plant might be located in Richland, Washington.

Breakthrough Energy is a global group of private investors who will financially support innovative clean energy ideas. It has two aims: to accelerate technological responses to climate change; and to be profitable for investors.

The group has claimed to only invest in technologies that can reduce at least 1% of global emissions every year. They’ll also only focus on projects that are feasible at scale. They currently have private-public partnerships with other organizations in Europe and Canada, and are currently working with governments there, and in the U.S.

Their 2021 focus is on hydrogen, electrofuels, cement, steel, and fertilizer. They also have a program committed to sustainable aviation fuel, green hydrogen, energy storage, and direct air capture and removal of carbon.

However, as of 2019, the Bill & Melinda Gates Foundation Trust owned $11 billion in shares associated with coal-burning utilities, along with $17 billion in the major transporter of Canada’s tar sand oil (which he acquired more of in 2020).

He offsets his carbon emissions

Every year, the tech mogul spends $7 million in carbon offsets to offset his “massive” carbon footprint. In an interview he said, “I probably have one of the highest greenhouse gas footprints on the planet, my personal flying alone is gigantic.”

His offsets support the purchase of green aviation fuel made from plants. He also minimizes personal emissions through the use of an electric car and solar panels.

Note, in early-2021, he joined a bid to buy a British private jet services firm.

“I put more into carbon capture than anyone.”

In early 2021, the Microsoft billionaire financially backed new technology that would spray dust into our atmosphere in order to reflect sunlight away from Earth. Geoengineering has received a lot of controversy over recent years, and the jury’s still out about something like this and the potential impact it will have.

What are your thoughts on billionaire Bill Gates and his approach to climate change? Have you read his book? Are you a fan of geoengineering? Let us know your thoughts in the comments!

The Environmental Drawbacks of Eating Seafood

How to Choose the Most Sustainable Fabrics