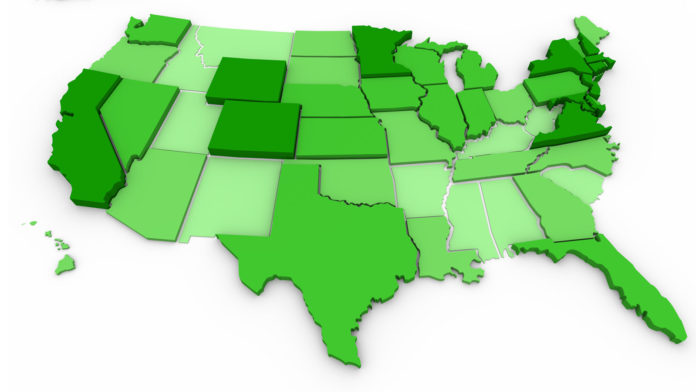 As you may have heard, in 2017 the United States announced that it will pull out of the Paris Climate Agreement. After this, many U.S states became even more aware of the damage the USA was causing to the climate and the environment.

After all, America is the second-largest greenhouse gas emitter, second only to China. Individual states’ attempts to reduce their carbon impact are clearly greatly needed. While it’s a difficult fight for each state, some states are clearly doing better than others in helping the environment.

We’ve made a list of the 10 most environmentally friendly states in America and included the criteria that we’ve based our judgment on.

There are many factors that have a major effect on the environment and climate, whether negative or positive. To determine how eco-friendly a state is, we looked into how each state deals with these factors.

Relying on fossil fuels, like oil or coal, for energy is one of the most effective ways of harming the environment. It’s the leading factor in greenhouse gas emissions.

Despite the USA’s withdrawal from the Paris Climate Agreement, 24 states have formed the U.S. Climate Alliance to hold themselves to the responsibility of reducing greenhouse gas emissions 28% below 2005 levels by 2025. Read more about it here: U.S. State Greenhouse Gas Emissions Targets.

This factor is really crucial as it directly affects nearly all the other factors.

The Green Industry – defined by the Bureau of Labor Statistics – is any industry that makes its profits while intentionally not causing any harm to the environment. This consideration for the environment is one of the main aspects of their business decision-making process.

Those decisions mainly include minimizing usage or/and material production that would create harmful waste by-products. They also increase their productions of bio-reducible products. These green industries make sure that their factories and supply chain leaves nothing environmentally harmful behind.

The increase in these industries correlates directly with the increase of green industry workers. We can use this data about green industry companies and employment to determine how eco-friendly a certain state is.

Air pollution is one of the most health-damaging factors today. While other damage to the environment can take generations to accumulate, air pollution puts everyone’s health at risk immediately.

According to United Press International, nearly 150 million American citizens (about half of the population) are exposed to polluted air regularly.

While states differ in the ways they help the environment, metrics around air pollution are a standard on whether environmental programs are working or not.

These are some of the important organizations that collect data on air pollution (such as the density of fine particulate matter):

The American Lung Association also publishes annual State of the Air reports on the most polluted counties in the states.

The 10 Most Environmentally Friendly States

With these 3 considerations, let’s take a look at the most environmentally friendly states of 2020. The following data and percentages come from the above-mentioned organizations.

The USA as a whole has increased its usage of renewable energy sources, like wind and solar, in the last decade. In 2017, 18% of electricity was produced by renewable sources. And solar power is one of the 10 most growing industries in the USA in 2020.

Although it ranks the 18th lowest on Green Industry employment, Vermont’s economy actually transformed due to the abundance of jobs in solar panel installations. It might rank lower because the other industries haven’t gone green yet. But as it’s also clear in its ranking in particle pollution, Vermont is on its way to being super eco-friendly.

But this is forgiven as Idaho’s support of renewable energy is clear. It’s only second to Vermont in its generation of clean energy.

Washington is where the Grand Coulee Dam is located, which is actually the largest hydroelectric plant in the United States. Through this, Washington became the 3rd highest generator of clean energy. It has very little reliance on fossil fuels.

Washington is responsible for 25% of all hydroelectric energy generated in the USA.

In addition, almost 23% of Washington’s workers are in green careers. This is a sign of how Washington’s industries are striving high to become green.

The state’s Governor, Jay Inslee, is an outspoken advocate for environmental protection and fighting climate change.

South Dakota has over 500 wind turbines and 4 major dams for hydroelectric power. In fact, hydroelectric energy is one of the main energy sources in the state.

Through this, it manages to rank the 4th in the generation of renewable sources. Although, it still uses nearly 25% of its energy from fossil fuels.

The progress made by the state over the last decade shouldn’t be overlooked. South Dakota’s burning of coal fell from over 51% to 21% over the last ten years.

Like its four predecessors, Maine generates the majority of its energy from renewable sources.

Oregon is balancing well between gradually reducing its fossil fuel burning and its generation of clean energy. It passed the Clean Electricity and Coal Transition Act in 2016 that requires companies to get at least half of their energy from renewable sources.

Oregon is also a leading state in the reduction of vehicle miles traveled. Its goal is to have vehicles to drive an average of 20% less by 2035. This is definitely a brilliant initiative, as vehicles are a significant contributor to air pollution.

Even though California generates only 50% of its energy from renewable sources, it’s considered one of the most environmentally-friendly states. This goes back to its overall effort. California, for instance, has the third-lowest energy consumption per capita of all of the states.

Besides its reliance for half of its energy on clean sources, Montana also has the 4th lowest average daily particle pollution. This means it has the 4th cleanest air to breathe in the entire country.

New York has a good balance between its various efforts in helping the environment. However, it’s clear that it falls short in some points. This is justified by New York’s energy conservation plans. The state has plans to decrease its greenhouse gas emissions by 40% by 2030.

Minnesota might not seem as impressive with its numbers compared to the above-mentioned states. But, it’s definitely impressive on a strong positive trajectory. In 2014, nearly 50% of energy was produced with coal alone. By 2017, this number fell by 10% which is no easy feat.

The United States is gradually becoming more and more aware of the damage it has contributed to the climate. This is thanks to these environmentally friendly states making positive impacts, one step at a time.

While they’re not perfect, these states are striving to become as eco-friendly as they can with even more improvements hopefully coming in the future.

They’re also leading by example and influencing other states, which will hopefully lead to a better future for our environment and for everyone.

Why Should You Consider a Microclover Lawn?