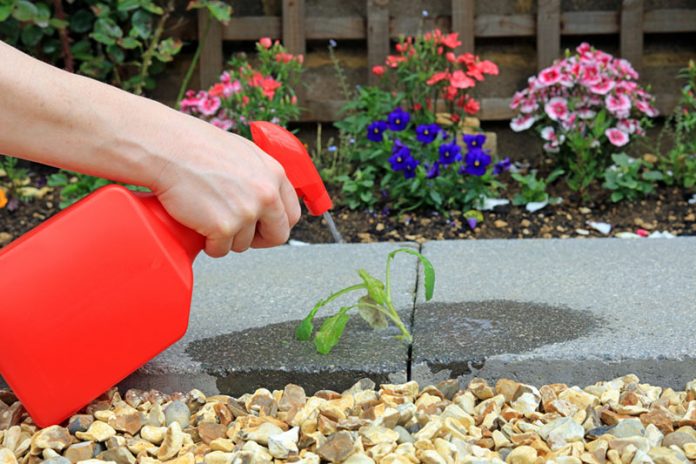 They’re everywhere—peeking through cracks in the pavement, sneaking up around the foundation of your home, and taking over all your garden beds. Weeds are a gardener’s worst nightmare, but getting rid of them can be just as scary.

Developing your green thumb in a green way means the avoidance of dangerous chemicals. Instead, we’ll tell you why, how, and when to use non-toxic weed killers.

First, let’s break down exactly what a weed killer, or herbicide, is.

Cambridge Dictionary defines a herbicide as: a chemical that is used to destroy plants, especially weeds.

‘Destroy’ is a pretty harsh word, isn’t it? It’s fitting, though, considering how damaging a single spray can be for both its intended target—and all that surrounds it (including pets and humans).

Take for instance the most popular weed killer for Americans, Roundup. It’s main ingredient is glyphosate, which works by blocking a plant enzyme that’s required for growth. In 2015, the World Health Organization categorized glyphosate as a Group 2a carcinogen, meaning that it is ‘probably carcinogenic to humans.’

Over the years, its safety has been contested. However, it has been reported to increase risk of a range of health risks including: autism, leaky-gut syndrome, endocrine-disruption, celiac disease, and cancer—to name just a few. Additionally, it has been associated with intestinal and digestive problems for pets.

Did we mention that it’s banned in several countries, and there’s been a push to ban it in the U.S., too?

If it’s not glyphosate, most conventional herbicides use 2,4-dichlorophenoxyacetic acid instead, which is also known as 2,4 D.

This one is also considered a hazardous substance and something that should be treated as a carcinogen. According to the NIH, it has been associated with health hazards like diarrhea, mild central nervous system depression, and possible kidney and liver injury—to name just a few.

Like glyphosate, the WHO’s International Agency for Research on Cancer has deemed that there’s evidence to suggest that 2,4 D is ‘possibly carcinogenic to humans.’

If these chemicals have been associated with negative consequences for human health, it makes you wonder about all of the smaller mammals, insects, and other types of fauna and flora that may come into contact with them…

Fortunately, there’s no need to welcome toxic chemicals to your garden party as there are several better options for both you and our planet. 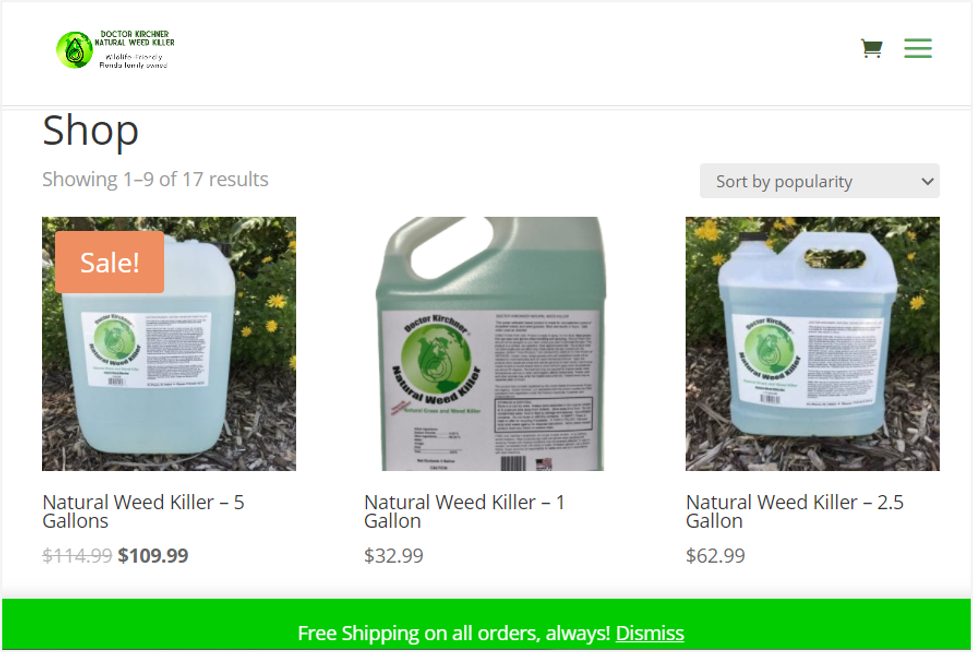 Made from ocean salt water, soap, and food-grade, commercial-strength vinegar, this non-selective weed killer is ready to take care of annoying weeds, without using glyphosate or hormone-disrupting chemicals. Unlike some other non-toxic herbicides, it also lists 100% of the ingredients!

As a non-selective weed killer, it will kill all plants it comes in contact with. Just 12-24 hours and grassy weeds will be taken care of.

The eco-friendly herbicide is made by a Florida-based, family-owned company, and based on “grandma’s recipe.” They’ve even won a Small Environmental Business of the Year award from their local community. 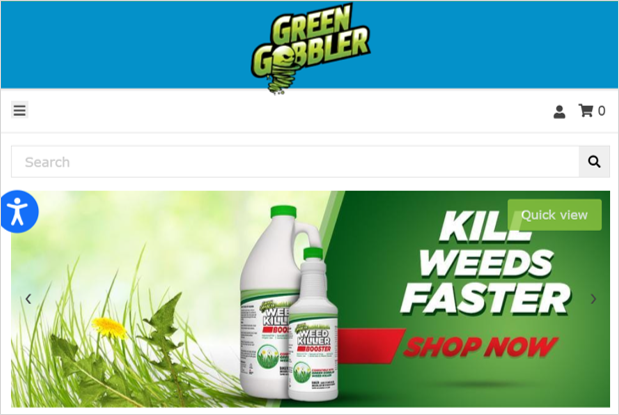 This acetic acid-based spray works to kill grass and weeds in less than 24 hours. It works on common weeds like dandelions, clover weeds, and crabgrass. It’s made from corn and made without glyphosate, meaning that it’s OMRI-certified as suitable for organic use. 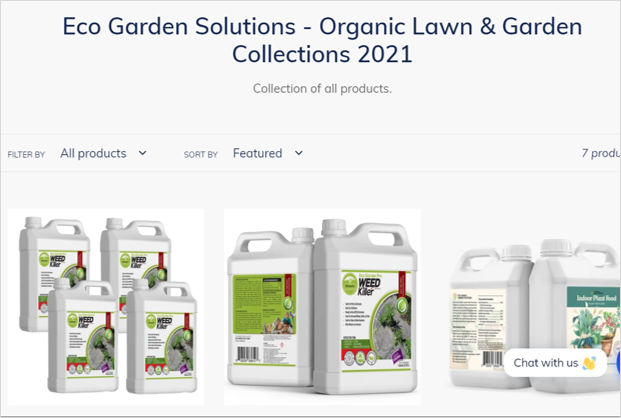 While this proprietary formula has been designed to kill grass and weeds fast (results within 24 hours), it’s also designed to be safe for humans, pets, bees, livestock, and fish. It’s made without toxic ingredients, instead using safe, biodegradable, phosphate-free ingredients that are 100% safe for ground water.

The all-natural and organic ingredients work by killing the roots, and won’t damage the surrounding concrete, pavement, etc. It is non-selective, so it will kill anything it comes into contact with.

Even some of the above weed killers include warning labels on their bottles or include a portion of “proprietary” ingredients that are unknown to users. If you want true peace of mind, stick with a DIY version.

This is your best bet at handling weeds safely. It may seem overwhelming, but just a couple of hours up front, or a few weekend weeding sessions and you’ll be weed-free.

If you can, it’s better to tackle weeds just after they’ve emerged when they’re still young. That said, a little weeding here and there on a daily basis is the best way to keep them under control. Also, be sure to remove the entire root.

If you’re looking for a quick, weed-control solution, you’ve probably already got everything you need! A gallon of vinegar can be combined with a tablespoon of dish soap and a cup of table salt.

The salt will prevent anything from coming back up through cracks in the pavement, so this is a good one-time spray at the beginning of the season. It is recommended that you apply this when it can be exposed to the sun.

It might sound crazy, but boiling water can also do the trick for certain weeds. This is one of the better options for weeds that come up on pathways, sidewalks, and driveways. Simply pour the boiling water directly on the roots to kill it.

If you want to be proactive, you can use mulch to prevent weeds from coming up in the first place. By placing mulch in your garden bed or around trees, you’re providing a barrier that will prevent most weeds from having adequate access to what they need to survive—namely, sunshine.

Working like acetic acid or vinegar, lemon juice can be combined with vinegar or used on its own. Spray directly on weeds, but be careful to not get any on your skin, as it can burn in the sun.

When should you apply your non-toxic herbicide? It’s better to be proactive when it comes to tackling garden weeds. Weed killers work better on young, new weeds. If you’ve got one that’s turned into a woody shrub, you might want to cut it down, wait for new shoots and leaves to appear, then apply the herbicide.

Also, try to apply your weed killer during dry, sunny weather. Rain will rinse the herbicide away, and might dilute it to the point of inefficiency. Avoid windy conditions, as this might cause the herbicide to drift and impact nearby plants.

Weeding during early spring or late summer is the best time.

As an important safety note, and even with non-toxic weed killers, always take precautions when applying herbicides. Wear gloves and glasses or goggles, and do your best to keep the weed killer off your skin and away from any pets. You should also wait until the sprayed area is fully dry before entering it.

Get to the Bottom of Sustainability with 8 Eco-Friendly Diapers

10 Eco-Conscious Companies that Support 1% for the Planet

The Environmental Drawbacks of Eating Seafood

10 Simple Ways to Reduce Plastic Use in Everyday Life

Sustainability Facts: Everything You Need to Know