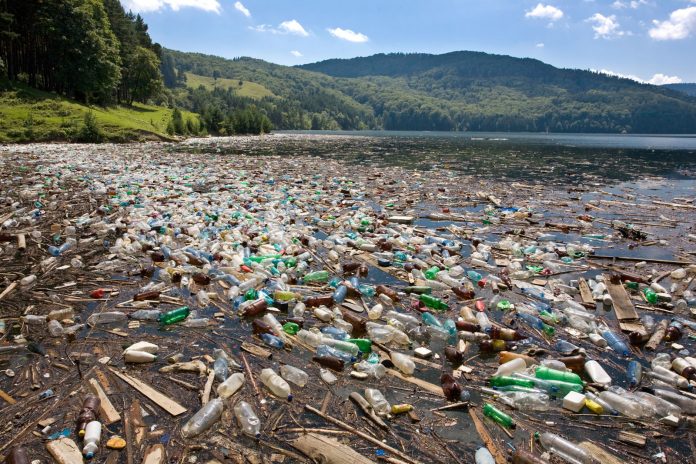 Plastic: it’s undoubtedly made certain aspects of our lives easier, healthier, and more convenient. Without plastic, many of our grocery items—particularly those that are quickly perishable—wouldn’t be available. We wouldn’t have comfy fleece clothes or water resistant gear. Our eyeglasses, medical implants, and laptops would look vastly different (or wouldn’t exist at all).

As they say though, too much of a good thing can be bad—and we’ve taken this adage to the maximum when it comes to our addiction with plastic. Let’s face it, our plastic-wrapped planet isn’t very happy with our obsession with this material. This article will look at how plastic is so harmful to the planet.

1. Our Problematic Take and Waste Mentality

One of the biggest problems with plastic is how we consume and dispose of it. Every year, we produce about 360 million tons of plastic; and because of how cheap plastic is to produce, it’s easy to throw away too.

When 40% of our plastic materials have been designed for single-use applications, it’s no wonder that we have a throw-away culture. But when you think about a plastic bag only being used for a few minutes before ending up in a landfill or ocean where it takes thousands of years to degrade, it’s blatantly obvious that there’s a problem.

Complicating things further, a whopping 91% of plastic isn’t recycled—which means that instead it ends up in our landfills or oceans (NRDC). This leads us to possibly the most popular problem with plastic: microplastics.

Plastic never really breaks down, it just breaks up. It breaks up into tiny pieces that become smaller and smaller until the heat, wind, water, and other elements eventually transform it into microplastics— fragments that are no more than 5 mm long and, as such, are very difficult to detect, but we do know that these are everywhere.

Microplastics are relatively new to scientists and we don’t fully understand their impacts yet. However, what we do know is that microplastics pose a threat to all types of life. We also know that microplastics end up everywhere—in soil, rain, air, dirt, and in humans and animals. We’re inhaling it, we’re eating it, and it’s ending up in the most unusual of places—like atop Mount Everest.

While it will be some time before we fully realize the environmental impact of microplastics, we have a better idea now about how some of the earlier stages of the plastic life cycle impact our planet.

About 8% of the world’s oil production goes towards producing plastics—about half as the “foodstocks” that make plastics and half for the energy used in the manufacturing process.

We all know that fracking, or hydraulic fracturing, is bad for our planet. What some of us don’t know is that one of the main products of fracking is plastic. In fact, the fracking industry has used the plastics industry to pump it up—and vice versa.

As renewable energy increasingly becomes a better option to power our country, the fracking industry is in need of a new buyer. Similarly, the plastics industry is in need of cheap ethane (a precursor to plastic that is found in fracked natural gas). A match made in pollution heaven, these two industries have been able to symbiotically fuel one another (pun intended).

Big companies who are traditionally known for oil, like ExxonMobil and Shell, are diversifying some of their operations to increase their output of plastic. Now, the production of plastic uses up about 14% of the world’s oil, but it’s expected to suck up 50% of global fossil fuel demand by 2050, bringing with it not just more CO2 emissions, but a slew of other problems too (Yale).

Worldwide, the plastics industry is linked to around 900 million tons of carbon dioxide emissions every year. If plastic were a country, it would be the fifth highest emitter in the world.

Demand is only expected to increase, too. Scientists expect CO2 emissions to reach 1.3 billion tons by 2030—or, to put it another way, the equivalent of 300 coal fired power plants (CIEL).

Not only does every piece of plastic start out as a fossil fuel, but it also releases greenhouse gases at every part of its life cycle.

Between extraction, transportation, refining, and manufacturing, every piece of plastic on Earth releases greenhouse gases in each of these processes. Land is cleared to create oil pipelines and forests are destroyed to make way for fracking. Not only does plastic release an estimated 13.5 million tons of CO2 just to extract and transport it, but it’s also taking away Earth’s ability to absorb some of those emissions.

And this doesn’t even consider what happens when plastic is wasted (i.e. when it’s incinerated), or the impact of that plastic when it’s in a landfill or floating in an ocean.

The incineration of plastic alone in 2019 produced more than 850 million metric tons of greenhouse gases, or what we would see from nearly 200 coal power plants. While landfilling has a lower emissions impact than incineration, discarded plastic makes up 18.5% of American landfills (EPA), which are largely mismanaged, meaning that a lot of plastic ends up making its way to our oceans and a lot of chemicals are released into the environment.

Along with landfills, plastic production plants have been associated with producing dangerous airborne toxins like toluene, benzene, and 1,3-Butadiene—which are all associated with higher rates of illness and cancer (Union of Concerned Scientists). These dangerous chemicals have also led to fires, explosions, and chemical leaks.

And then there’s the additives that most of our plastic products contain in order to be more flexible, durable, and stronger. These chemicals are not leached during the production of plastic, but it also produces plastic products that won’t biodegrade for hundreds of years—which is why so many of them end up in our oceans.

Imagine being stranded on Henderson Island, a remote, uninhabited atoll in the Pacific Ocean. You may feel like you’re on another planet—that is, until you look around and see washed up plastic bottles and the occasional plastic toy.

Plastic is EVERYWHERE. Even the world’s most remote, human-uninhabited places have become a dumping ground for plastic. While land-based plastic pollution is one very serious problem, ocean plastics are another beast altogether.

Currently, plastic trash can be found in 90% of sea bird stomachs, and in the guts of 50% of sea turtles. When they’re not eating it, marine mammals, fish, and sea birds can become entangled in plastic debris—leading to the deaths of millions of animals every year.

And unfortunately the problem doesn’t seem to be letting up anytime soon. By 2050, scientists predict that the mass of plastic in the ocean will outweigh the mass of all of the fish in the ocean (World Economic Forum).

Whether washing up on coastlines, emitting pollution and releasing toxic chemicals, or being sent away to be recycled, the impact of our addiction to plastic is being disproportionately experienced by low-income countries and communities.

Take for instance Southeast Asia. Until recently, much of the world’s recycling ended up there—until communities were literally drowning under thousands and thousands of tons of plastic trash (BBC).

Closer to home, many low-income and predominantly BIPOC communities are experiencing the detrimental health impacts of fracking or incineration plants. Like with many other environmental concerns, those already burdened by social inequalities are also picking up the bill of our plastic problem.

Beyond Bans: Dealing with Plastic

Many cities, states, and companies have already taken big steps to ban plastic. From prohibited bags and straws, to new bio-based packaging, we are making improvements. However, plastic consumption is still expected to rise.

If you’re trying to reduce your plastic use, be sure to check out our article 10 Simple Ways to Reduce Plastic Use in Everyday Life.

We would love to know what else you do to minimize your plastic consumption. Let us know in the comments!

The Sustainable Apparel Coalition: How Is It Saving Our Planet?