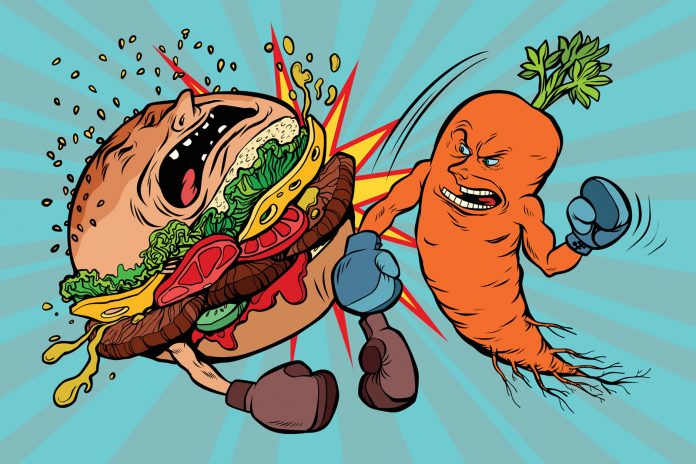 You’re ready to make some positive changes for the planet. You keep your home’s windows open instead of running the AC on full blast. It’s your default to “request paperless” for all your bills and business mail. And forget about plastic straws—your reusable one is always within reach when out to eat.

These steps show your intentions are in the right place, but the unfortunate truth is that they will make little difference for the environment compared to what’s on your plate.

It turns out that your consumption of meat and other animal products has one of the biggest impacts on your carbon footprint, and your diet is also one of the easiest places to make a positive change.

In 2018, the research journal Nature came out with a strong stance against the environmental impacts of eating meat. The report recommends we all follow primarily plant-based diets with occasional indulgences of meat, dairy, and sugar if the planet is to have any hope of supporting ten billion people by 2050.

In other words, reducing your meat consumption isn’t just an eco-conscious choice; it might be an essential one. In this article, we not only discuss the environmental benefits of reducing meat, but also ways to make it a bit easier for the meat lovers out there!

Here are some of the biggest reasons to consider reducing the amount of meat in your meals from an environmental perspective.

The meat industry sucks down a disproportionate amount of the world’s fresh water supply. Agriculture alone accounts for 92% of our water use, and raising animals uses a full third of that.

Check out the amount of water needed to produce the following animal products:

In other words, you can slash your personal freshwater footprint by planning your meals around plant-based proteins instead of meat.

Beyond your car, your burger habit is likely the biggest fossil fuel producer in your daily life.

This is partly due to the fact that ruminant animals like cows and sheep produce methane during digestion, a greenhouse gas that’s 25% more potent than carbon dioxide.

Put another way, every pound of beef you avoid eating saves around 30 pounds of CO2 from entering the atmosphere. That’s more than 13 times the amount generated by crops like beans, lentils, and tofu.

In today’s world, access to animal products is unfairly distributed.

The end result? An oversupply of animal products that the farmers themselves then can’t afford to purchase.

If the total supply of crops currently fed to animals went to humans instead, the planet could support an additional four billion people without a problem. That would exceed the requirements necessary for our predicted population by 2050.

Reducing your meat consumption can rebalance some of this inequality and ensures that the world’s most vulnerable populations aren’t as food insecure.

There’s no doubt that the industrial agriculture system is wreaking havoc on the environment, and the meat industry is one of the worst offenders. This is primarily due to the vast number of inputs necessary to grow livestock feed.

The EWG estimates that it takes more than 167 million pounds of pesticides and 17 billion pounds of synthetic fertilizers each year to grow livestock feed in the United States alone. These synthetic compounds rarely stay in farm fields and instead enter our water system after every heavy rain, where they contribute to toxic algae blooms and the massive “dead zone” in the middle of the Gulf of Mexico.

Concentrated animal feeding operations (CAFOs) only add to the problem. It’s estimated that all US livestock produce up to 20 times more waste than the entire human population, and a large pork operation can produce more than 1.6 million tons of manure a year, or the equivalent of one and a half times the total waste of a city the size of Philadelphia.

Plants don’t poop, so focusing your diet around fruits and vegetables eliminates this waste management problem. As a bonus, it can also result in healthier farm communities across the country.

According to the Food and Agricultural Organization of the United Nations, an eye-watering 30% of the earth’s ice-free surface is devoted to raising livestock, and a further 33% of all arable land (approximately 471 million ha) is used for feed crop production.

Putting this much land into animal production takes a toll on the planet. Up to 70% of grazing space in dry areas has been degraded due to overuse and compaction.

Three-quarters of the land in the Amazon that was previously forested is used as pasture space today, and a good portion of the rest is used to grow soybeans that become cattle feed. This makes the cattle industry one of the top causes of rainforest destruction.

If we all went vegetarian, growing enough food for the global population would require just 20% of the pasture space currently in production. This could open the door to return this land to habitat space for wild animals and consequently reap the benefits of natural ecological services.

Not Ready To Give Up Meat? You Can Still Make a Difference!

When faced with these facts, it’s tempting to just throw in the towel and head to the nearest BBQ joint, or to make a total commitment to going vegan that burns you out within weeks. Both mindsets are counterproductive for fostering the long-term changes that result in real progress for the planet.

When it comes to living a more ecologically sound lifestyle, it’s misguided to assume you must adopt an all-or-nothing approach. Cutting down on even one meat-filled meal a week is a net gain for the environment, and small changes are the ones you’re most likely to stick with over time.

Here are some actionable steps we all can take to preserve the planet without compromising on cuisine:

There are also many great vegetarian/vegan cooking blogs and YouTube channels to help you swap out one or a few meals per week in exchange for delicious and creative protein-packed, meat-free and sustainable options.

Our favorite meat-free recipe blogs right now include From My Bowl, Avante-Garde Vegan, and Pick Up Limes, just to name a few to help you get started!

12 Most Environmentally Friendly Companies and Their Sustainability Goals