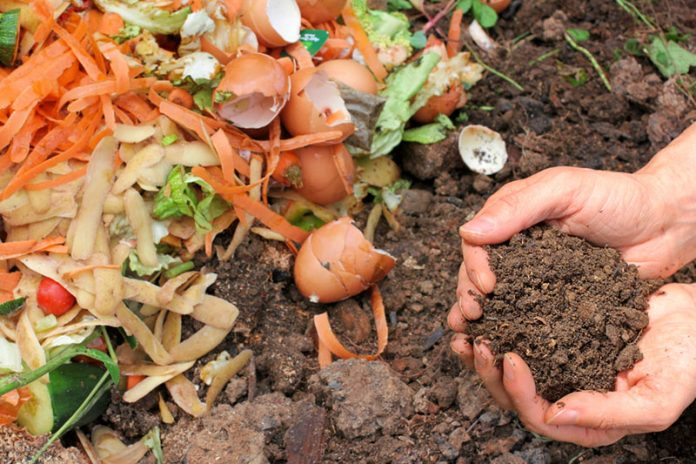 You may have heard about composting, but you might not really understand what it means or it’s environmental importance. So what are the basics?

Compost is a version of recycling, but instead of recycling aluminum, plastic, or paper, it is focused on recycling and reusing organic waste, like food scraps. Most uneaten food can be composted, whether it’s inedible like a banana peel, it’s rotten or gone bad, or there is simply too much to be eaten. We can also compost anything else that is organic, or comes directly from the earth, such as grass clippings, autumn leaves, and even animal products.

When it comes to disposing organic waste, composting should not be the first option. Instead, we should try to avoid wasting the products at all: Can you craft something from the wood in the tree limb from your yard? Can you bake with the fruit that is becoming too soft to eat by itself? Can you roast the seeds that come from your pumpkin or make chips from the potato skin shavings?

Once exhausting all reuse options with organic waste, composting is the next best option. When this type of material is consolidated, it rots quickly and when it’s not mixed with other non-biodegradable materials like plastic or glass, it turns back into dirt very quickly – usually within weeks. This dirt is now nutrient-rich soil that can be used to plant new things for a garden, on a farm, or even in a potted plant.

The best part about composting is that it requires very little effort, intervention, and is one of the most environmentally-friendly things that you can do.

Why is Composting So Important?

When compost is mixed in with other garbage at a landfill, it gets trapped between material that does not degrade and begins to decompose without oxygen. When it rots anaerobically, it creates methane, which is more than 20 times more harmful to the environment than carbon dioxide.

Food waste is also heavy and requires unnecessary transport to landfills, which also creates carbon dioxide. The scientific fact is that composting, which includes separating organic waste from landfilled garbage, is the most sustainable solution.

If the science doesn’t sway you, composting is also a great way to save money. It’s estimated that households in the U.S. waste approximately 76 billion pounds of food per year, due to poor planning, over-buying, spoilage, or date label confusion. Right now, only 5% of wasted food in the US is composted, which means that nearly 72 billion pounds of food is being sent to landfills.

Not only is food waste bad for the environment, but it also costs us money. Before composting, it’s critical to try to make responsible food purchases and try to avoid throwing away organic waste. Throwing away food is quite literally throwing away money. It also fills up landfills, requiring us to build new ones and requires unnecessary tax money to be dedicated to municipal waste haulers.

In some municipalities, the hauler charges per weight of the haul and because organic waste is heavier than paper and plastic, the one throwing away the organics will not only be wasting money on uneaten food, but will also be paying the city to get rid of it for them.

Not only is composting the most sustainable solution for organic waste, it also makes financial sense. When I started composting at home, I quickly noticed how long it took to fill up my trash can, saving me money on garbage bags and reducing the hassle of disposing of my garbage in a New York City apartment.

If Composting Makes So Much Sense, Why Doesn’t Everyone Do It?

The sad fact of the matter is that our current waste management system is often not set up to divert organic waste. Most Americans, especially in urban and suburban neighborhoods, grew up in households where everything was thrown in the garbage and sent to the landfill and have recently adopted recycling into their practice.

Composting may seem like another “thing to do” and may be perceived as a chore. The catch-22 is that once more people start composting at home, the demand will force the market and municipalities to adapt, which will support more integrated, simple-to-use composting systems.

There are stated that are making sure that it’s better integrated into the systems. As an example, Vermont recently made it illegal to put food waste in the garbage!

However, composting can (and should) be done anywhere. Right now, it’s already being done in places that you may never expect, like your favorite local restaurant or grocery store, your local baseball team’s ballpark, your child’s school, or even your office.

If you’re curious, ask the management next time you visit any of these places. If they aren’t already doing it, sometimes it just takes someone to remind them. However, you may be pleasantly surprised with how many places are already working on composting plans and procedures and coordinating with local gardens and farms to close the loop.

Though many people think that decomposing food smells bad and attracts pests, compost is actually nearly odorless and can be easily stored to avoid attracting bugs. For one, the in-home bins are small enough that they fill up before the food truly begins to rot.

These in-home bins are built with small ventilation holes that are filtered with a carbon filter. This system is designed to provide the waste with the oxygen it needs to begin the composting process without leeching any odors, even if it’s just the smell of an orange peel. Because the bins do not release odor, bugs and other pests cannot detect them.

The beauty of sending household waste to a municipal compost facility or to a garden or farm is that those systems are set up to process and facilitate the healthy decomposition of organic waste, which should also be relatively odorless.

I Live in a City or a Residential Neighborhood. How Do I Get Started?

A quick Google search should tell you if your neighborhood, locality, or city has a composting program. Many cities around the US are currently piloting municipal compost collection and you may be able to sign up for curbside collection or locate convenient drop-off points. If you don’t have much luck with the public sector, many organizations and nonprofits have launched collection programs and often donate those collections to local farms or gardens.

If you’re still not having luck, local community gardens and farms typically welcome household organic waste and sometimes offer drop-off dates or will have points of collection at the local farmer’s market. If you have a yard or outdoor space, you can also consider composting at home and using the dirt that you make to plant some new potted plants or make a small vegetable garden.

The only thing you may need to purchase is a countertop compost bin and certified compostable bags – These small investments, found with a quick Google search, will help to make composting simple, painless, and hassle-free.

Do you still have composting questions? Let us know in the comments below!

What is a B Corporation and Why Does it Matter?

50 Most Sustainable Foods for a Planet-Friendly Plate